Australia is in the grip of a mental health “crisis” that is leading to the unnecessary deaths of thousands. Suicide is the leading cause of death for Australians aged between 15 and 44, with almost seven people taking their life every day. The Commonwealth Government currently spends about $10 billion a year on mental health, but about half of this was spent on welfare payments, which were “the cost of failure, not the cost of direct care”. It’s estimated 50 per cent of Australians suffer mental illness at some point in their lives.

What are our assumptions in regards to mental illness and to the solutions we bring to this aspect of human suffering?

Current psychology and psychiatry has brought society on the wrong track

The radically new model of the human mind proposed by Sigmund Freud (1856-1939) in the early 20th century, the inventor of modern psychology and psychoanalysis, changed the way we all think about ourselves, our language, and our culture. The words and phrases he popularised are deeply ingrained in popular culture and everyday language. Freud introduced the term “unconscious” in our culture. Eavesdrop on a conversation and it’s likely that, sooner or later, a concept invented or popularised by the founding father of modern psychology and psychiatry will pop up. Everyone knows what you’re on about when you mention Freud. Or at least they think they do. The unconscious. Dreams. Mummy and daddy issues. You don’t have to read Freud to live in a world where Freud is important or to think in a Freudian way.

Freud’s dynamic psychology, which implies that reality lies off stage or out of consciousness, simultaneously offers a mode of interpretation, a research method for psychology, a form of psychotherapy, and a theory of society and social existence.

Freud found with his patients in his medical practice in Vienna that a symptom could often be traced back to a psychological trauma in early life, and that when revealed, strong emotional reactions were produced, and the symptom disappeared. He concluded that symptoms were caused by painful unpleasant memories of traumatic events that had been repressed into the unconscious, so patients no longer remembered them, and symptoms were alleviated by making the memories conscious. But is this true? Is this the only interpretation that can be given to the fascinating observation that symptoms were alleviated when a traumatic event was brought to awareness?

Sigmund Freud’s explanation of observations he made in his clinic in Vienna, may be responsible for the biggest illusion of the last one hundred years and has set humanity back in the evolution of consciousness. Freud’s explanation of his basic observations of consciousness has shaped how we came to relate to mental illness in a cause and effect model that leaves the person suffering of unhappiness, depression, and anxiety, being a victim of their circumstances and searching for truth as an ever reciding mirage, never finding the true reason “why they are the way they are.”

Freud’s explanations of a phenomenon of awareness has shaped in the last one hundred years how we see ourselves, how we see our problems and the solutions we bring to them. It has shaped our judicious system. It has created a culture of entitlement and an ever expanding public health burden that financially is unsustainable. It has been the perfect scapegoat for people to stay with the familiar and avoid the discomfort that comes with expanding one’s awareness.

As a health practitioner, I am witness to patients presenting at my medical practice,  already defining their problem in terms of something that has happened in the past and the inability to cope with them. We now live in a society, where people Google their dis-ease on the internet, and if the explanation they find “fits” their experiences, they may find temporary release in the explanation, but only to find out soon in the real world that the explanation does not set them free from their problems. Often the methodology they apply on themselves makes them more disturbed than the original problem.

Freud’s interpretation of his clinical observation has shaped the way we think and talk about our problems. Let me break the news: there is no unconsciousness. It was all made up one hundred years ago and has sent many of us, including myself, on a futile expedition of exploring the past, in search of the diamond of being. Freud himself made a statement that release from neurosis can only bring a person back to the neurosis of daily life.

Freud believed that by describing mental processes with the same scientific methodology as was applied to the external world to the inner world, people would have a greater choice. He invented a new vocabulary that became part of our culture. Words like unconsciousness, Ego, projection, etc. became part of the vocabulary of life. This new language of explaining influenced profoundly psychology and psychiatry as it was practiced during our last century.

Suppose there is a whole new and different interpretation available that would explain the phenomena Freud’s observations were pointing to?

The difference between a linear and dynamic approach

A linear explanation of what is in essence a co-arising dynamic of consciousness. What about bringing understanding to Freud’s observation from a dynamic approach – one that honors the true nature of consciousness? Here are some of the premises of a new philosophy that explains human’s condition:

In my practice of medicine, when I meet with a patient who complaints of racing thought, thoughts that are compelling and repetitive, anxiety or depression, I say six things to him or her which gives an instant new perspective and relief of their symptoms:

The world of consciousness, the world of our arising thoughts works differently, is governed by a different set of principles than the world of physical objects.

Freud encouraged people to live the illusion that dwelling on a past that exists out there as an independent reality – which requires them to engage with their thoughts – somehow would enable them to set themselves free from their demons. Dwelling in a language of explaining and assigning cause with respect to those aspects of ourselves that we are at dis-ease with, does not set being free, – to the contrary, it only moves us further away from the essence of our being and leads to immobilization.

This article is a work in progress 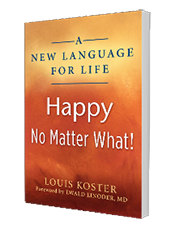